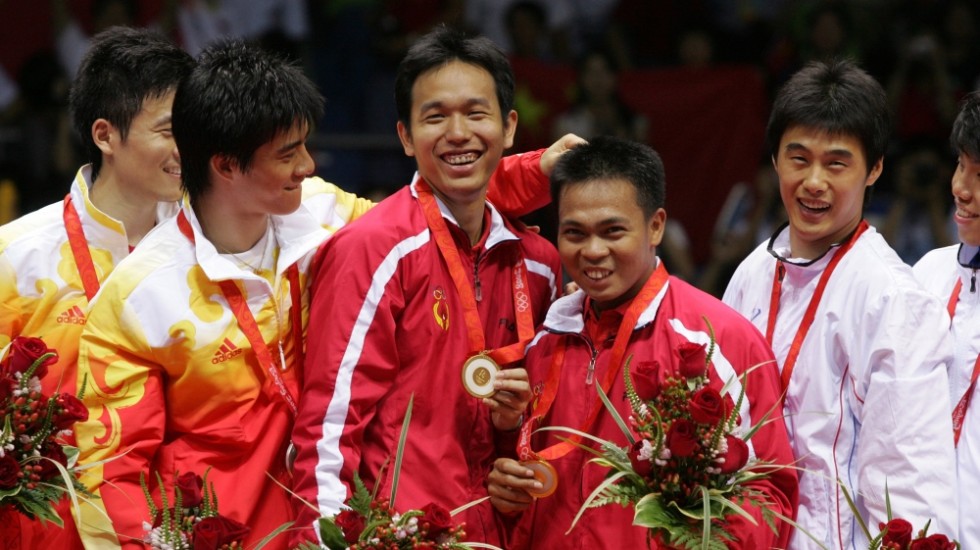 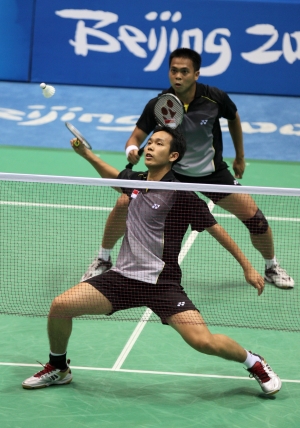 In another crazy night of badminton and after the unexpected gold from Zhang Ning in the afternoon session, the home fans were on for some thrilling matches involving their local heroes but had to contend with contrasting fortunes as Chen Jin got the bronze while Cai Yun and Fu Haifeng had to settle for silver leaving gold to Indonesia’s Markis Kido and Hendra Setiawan.

They came, they saw, they conquered. Markis Kido and Hendra Setiawan provided today with the gold medal Indonesia was waiting for since the early exit of their men’s singles shuttlers and Maria Kristin’s bronze medal.

But what a match the young Indonesians had to overcome to beat Cai and Fu and their 5000 strong supporters. A match full of contrasting play between the first game, where the Chinese were all fired up, leaving absolutely no time for their opponent to breathe, serving fast, low, taking all the chances to nail the shuttle.

21/12 and it was a done deal. The other two games certainly did not resemble the first one, with a clear difference in style. It was the Indonesians who were up and attacking, with the shorter Kido jumping high and Setiawan working wonders at the net.

Soon, both teams had a game each on the score board. In spite of the strong crowd cheering for their hope to see – at last, the end of the Olympic title drought in the men’s doubles– it was the Indonesians who got the best start.

There was a thriller, however, towards the end, when they led 20/12 and saw the Chinese climb 4 ladders, but the margin was too big and once Fu’s last shuttle was called out, the two friends were brought down onto the ground by their coach to celebrate the Indonesian tradition for a final 12/21 – 21/11 – 21/16 victory.

“It’s a great honour to be part of this tradition, and to succeed to Rexy/Ricky, and Tony and Candra. We are glad we were able to play well tonight to get this success. Also, it’s a great timing to win as tomorrow (today) is Indonesia’s Independence Day. The fact that we had won here in China in the China Open in 2006 and 2007 certainly gave us confidence,” said Markis Kido.

The Chinese, of course, were disappointed but still felt they achieved something important for China in this category. “You have to realise that there are only two strong pairs from China going to tournaments and we are proud to be in the final tonight, even if we are disappointed to have lost. We’ve trained for this event for 6 years now, and achieving a silver medal is somehow reaching an important target,” said Fu Haifeng.

Hwang Ji Man and Lee Jae Jin were also on the podium after defeating Denmark’s Lars Paaske and Jonas Rasmussen earlier in the day, depriving Europe for its last chance to scoop a medal – for the first time in Olympic history, making Asia the definite powerhouse of badminton. 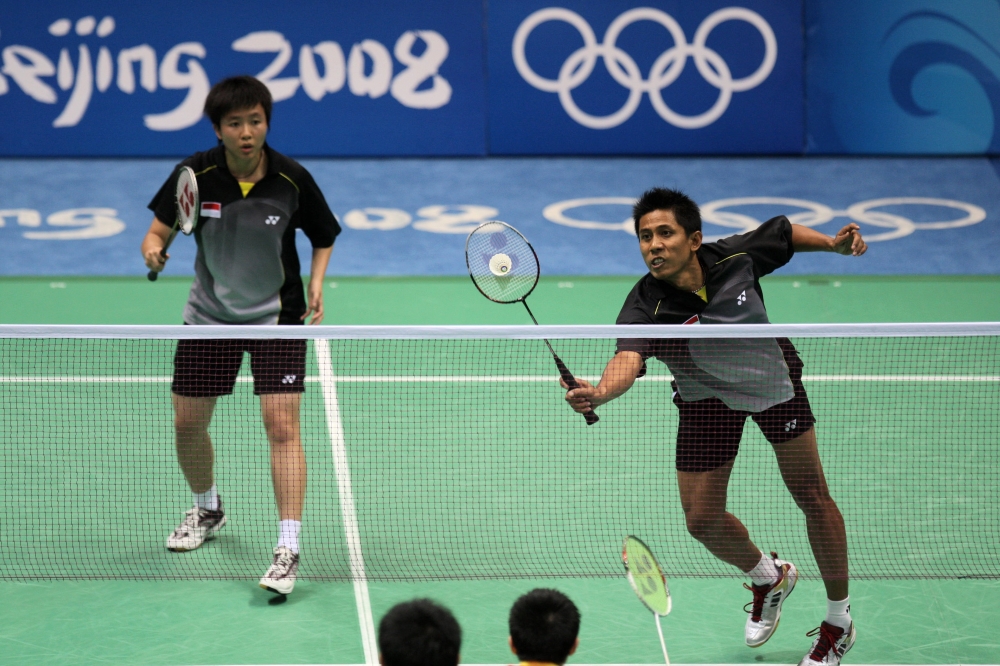 After the two first medals of the badminton event in Beijing had already been awarded to China in the women’s singles and doubles respectively, the hosts were banking on youngsters He Hanbin and Yu Yang to keep their flags flying in the mixed doubles.

And it was a close, very close call for the youngsters who were well supported by the usual noisy and packed stadium. In a vibrant atmosphere, He and Yu played a tremendous first game, leaving no space for Liliyana’s brilliant net play of Nova Widianto’s strong attacks.

“We had some problems in the first game to get adjusted to their style. We were constantly under pressure and our opponents played very fast all throughout the first game,” said Nova on the loss of the first game 15/21. The Indonesians, double world champions however got their game going and were more aggressive in the second and third games.

The second was a formality, won 21/11 while the rubber game was to be a thriller as the fans were kept on the edge of their seats. Oddly enough, it was Liliyana who saved her team – the least experienced of both players, with a first incredible save at 19/18, giving Indonesia their first two match points.

“I did make a lot of mistakes in the first game, but then we got our game going and I was more confident in the second and last game. When we reached match point and failed to convert the first two, I believed we could still make it,” said Liliyana.

The Koreans prevented an all Indonesian affair in the mixed doubles, thanks to an inspired duo of Lee Young Dae and Lee Hyo Jung. The latter had already clinched silver in the women’s doubles the previous night but obviously wanted to go one step further in the mixed, which was made possible by her young and amazing partner Lee Young Dae, who once again put on a splendid performance.

Under the gaze of many of his former idols – Lee Dong Soo being on the bench, Ha Tae Kwon in the stands and former Olympic champion Kim Dong Moon at the TV stand, commentating for Korean National TV. Both teams got even at one game all, but the Korean’s play was more accurate in the third, while the Indonesians committed too many mistakes and giving too many attacking opportunities to their opponents, troubled by the height of Lee Hyo Jung at the net.

In the men’s singles bronze medal match, Chen Jin, banking on his speed and the strong home support, and ultimately his endurance to smash his way to a third place finish.

Earlier in the day, one of the biggest surprises of the tournament had seen Zhang Ning beat her compatriot Xie Xingfang in a thriller with Indonesia’s Maria Kristin taking bronze out of Lu Lan’s reach to forbid China’s clean sweep. 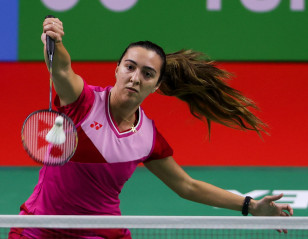 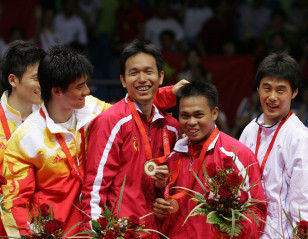 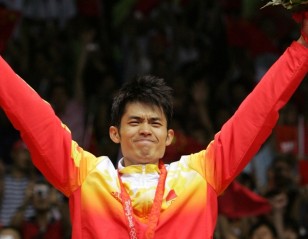 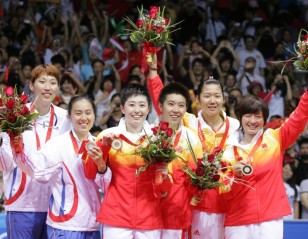 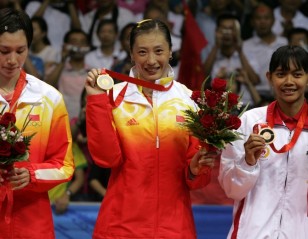